Get fresh music recommendations delivered to your inbox every Friday.
We've updated our Terms of Use. You can review the changes here.

The Nights of Skopje 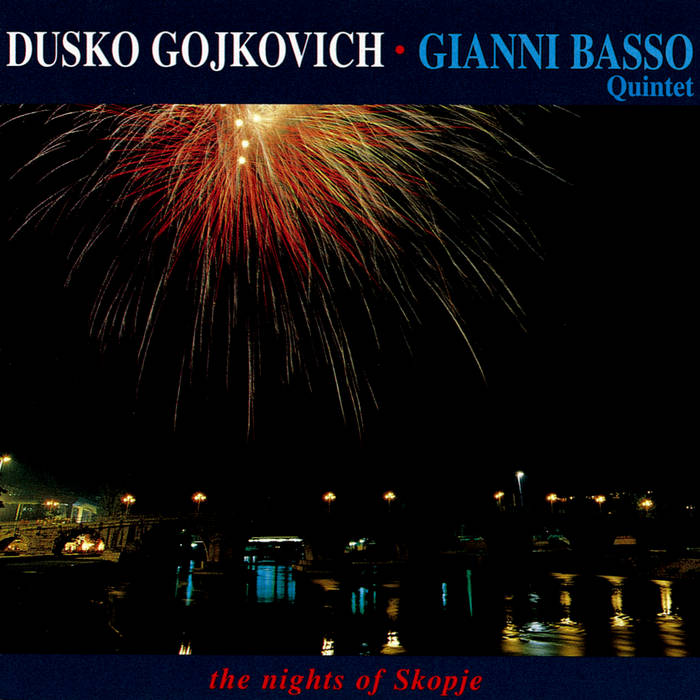 All compositions by Dusko Gojkovich except:
tracks 2 & 6 by G. Basso
track 1 by C. Parker
track 5 by C. Fischer
track 9 by C. Porter

It was May 1994 in Munich where I met Dusko Gojkovich to arrange a gig for him and Gianni Basso with a big band at Skopje Jazz Festival. Dusko felt very enthusiastic about playing in Skopje again after nearly 30 years, as his love for Macedonian rhythms and melodies was already proved, back in the sixties when he recorded the legendary album “Swinging Macedonia”. He even broadened the whole idea of returning to the heart of the Balkan heritage that once was his inspiration: “Me and Gianni, we could stay a couple of days longer in Skopje and made our first recording together. Find a studio and choose three young musicians that might get a wider attention with us”.
That was an offer that simply can’t be refused. Dusko and Gianni first met and played together in the late fifties. Soon after Dusko left for States, studying at Berklee and later joining Maynard Ferguson and Woody Herman orchestras. Gianni continued with the most popular Italian jazz ensemble of that period, Basso-Valdambrini Sextet, often accompanying well-known American jazz musicians, like Lee Konitz, Chet Baker, Gerry Mulligan, Billie Holliday… The two musicians met again in the late seventies, in a meantime earning a first class reputation on the jazz scene. They found that they still shared the same love for bebop, blues and ballads, as well as the joy of life, of which jazz was a significant part of. Both decided to work together again and had great success on numerous festivals, clubs and concert halls. Oddly enough, they never recorded together! And the offer for the “historic session” became an obsession for me. I had to complete the quintet with young musicians, good enough to match the “old mates”.
The young bass player Martin Gjakonovski was the first I had in mind. A son of the best known Macedonian jazz arranger and extremely talented musician himself. He lives and works successfully in Cologne. Martin suggested the drummer, Kruno Levacich, an experienced guy from Zagreb, Croatia, with whom he already played and recorded. A perfect fit. In the last minute, from Ljubljana, Slovenia, arrived the piano player, Peter Michelich. Peter moved to New York fiver years ago to continue the studies he had started in Graz, Austria. Peter mentions Wynton Kelly, Bobby Timmons and Red Garland as his inspiration and in NYC he already played with a lot of jazz greats. An extremely matured pianist with a great future. After the Skopje sessions, Peter became a regular member of Gojkovich-Basso Quintet.
Gojkovich and Basso brought in the studio three standards: “Yardbird Suite”, “You’ve Changed” and “You’d Be So Nice”, plus a couple of originals. Gojkovich chose more recent “Medium Rare” and older “Snap Shot”, “Adriatica” and “Nights of Skopje”. I called Basso “Mr. Loverman”, after contributing his own beautiful ballads “Simona” and “Miss Bo”. It is hard to believe that such a tune as “Simona” was recorded here for the first time. Both Gojkovich and Basso were impressed with the tapes. The great time spent in Skopje, the atmosphere during the sessions, all left significant mark on the music. Besides the fact, I would add, that both Dusko and Gianni are still among the most prolific and expressive musicians on the European jazz scene. Now it's up to you to share the joy we had preparing this CD.
- Oliver Belopeta, 1995

This album was originally released as a CD in 1995, by SJF Records.

Bandcamp Daily  your guide to the world of Bandcamp